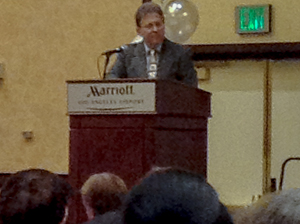 LOS ANGELES – The Bureau of Real Estate is focused on the “biggest and baddest” violators of the law, according to State of California Real Estate Commissioner Wayne Bell, who spoke at a program hosted by the California Bar Association’s Real Estate Sales & Brokerage Sub-Section of the Property Law Section.

+++Commissioner Bell emphasized that his goal is to promote a fair, competent, and law-abiding real estate industry in California.  He explained that unlicensed activity will receive more attention.

Commissioner Bell wants to pursue criminal actions against unlicensed individuals that violate real estate laws. In the future, he said, individuals accused of unlicensed activity may receive a “Notice to Appear” that requires an appearance in criminal court. Commissioner Bell plans to accomplish these objectives by prioritizing the Bureau’s enforcement efforts. He also wants to make the Bureau’s activities more transparent.

A NEW COMMISSIONER FOR A NEW BUREAU

+++In July, CalBRE became the successor to the former California Department of Real Estate (DRE).  Commissioner Bell, an attorney and licensed real estate broker, was appointed as Chief Officer of CalBRE by Jerry Brown earlier this year.

COMMISSIONER’S ROLE AT THE CALIFORNIA BUREAU OF REAL ESTATE

+++The Commissioner manages a staff of approximately 335 CalBRE employees. Together, they oversee more than 400,000 real estate agents and mortgage loan originators. The CalBRE enforces California’s Real Estate laws and regulations including the sale, lease, or financing of subdivided lands and the qualification of subdivision offerings.

Executive Committee Members of the Property Law Section of the California State Bar were in attendance including, Rinat Klier-Erlich, Jose Mendoza, and Mary Work.

Please limit your subject entry to two sentences. If applicable, please identify the type of license you are inquiring about.

Visiting this website, or sending an e-mail through this website, does not constitute the formation of an attorney-client relationship.